While standing in the shade of my tent, I look out over a lagoon of bent grass to the trees at its far shoreline.  A few of the stalks shiver and crosshatch in the lagoon as a mouse or grasshopper nibble at their stems.  Otherwise, the grass is motionless.

I stick my hands in my pocket and scuff dust with the toe of my boot.

Something rustles in the underbrush.  My sleepy senses come to full alert.  It’s an ancient world out there  – full of primitive memories storied at the bottom of our brains.  i spot one of the honorary camp staff, a francolin, scratching around a clump of buffalo grass.

We are all afraid of something.  Thembi gets in a tizzy over bees.  (Imagine bees up your nose!)  Eggshells horrify Jabu.  For Morula, it’s the fear of not belonging.

Are elephants afraid of mice?  No, but quick small things moving around their feet startle them.  I consider that a prudent reaction in a world full of snakes.

My fears are primitive, hard-wired into the base of my brain from the time when humans were prey to huge fanged predators – cats as large as grizzlies, bears as large as elephants.  My primitive brain is not comfortable when there are carnivores around, especially when I can’t see them.

Just last night a lion’s roar ripped me awake from a deep sleep: WAAA-AH-UNGHHH   UNGH  UNGH  UNGH  ungh  ungh. . . .It ended with those deep grunts lions cough up from their bellies.

A lion’s roar can be heard for five miles.  This one was incredibly loud and incredibly close, right at the edge of camp.

A cold set of fingers wrapped around my heart.  In the darkness my heart threw itself repeatedly against my ribs, then slowly backed into a corner of my chest.  Wary, it waited there for another roar, which never came.  I knew I was safe – no lion has ever dragged someone out of a zippered tent in Botswana.    But tell that to my primitive brain.

Four days ago, as I waited for Doug to pick me up from Stanley’s Camp, I had enough time before his arrival to join an evening game drive.  A young couple on their first trip to Africa climbed into the tier of seats behind me in the Landcruiser and held hands.  They were on their honeymoon.  John, our driver and guide, explained that two other vehicles from camp had found a pride of lions on the other side of the reserve – but it was too far away for us to join them and be back before dinner. 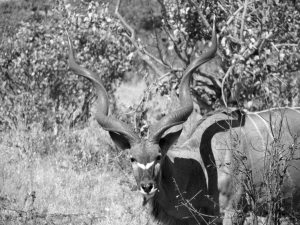 So we headed off in the opposite direction.  The young couple happily snapped photographs of zebras and impalas and baboons, giddy with the realization they were in the midst of their dream vacation.  A male kudu with magnificent horns kept us in one place for nearly a half hour as the couple peppered John with questions and marveled over the graceful curl of the kudu’s horns.

At dusk John parked at the top of a knoll.  With open grassland all around us it was safe to descend from the vehicle.  He prepared traditional sundowners – gin and tonics – and handed them around.

As I take my first sip a lion roared in the near distance.  “That’s not very far,” I said and looked at John.

“We could get lucky,” he looked at the couple with us.

They nodded, so we dashed our drinks on the ground, stashed our glasses back in their basket, and scrambled back into the Landcruiser.

Just down the road, where we’d been half an hour earlier, four large males lounged in the tall grass alongside our tracks.  One lifted his chin and roared, loud enough to rattle our hearts:  WAAUNNNNNNGH, UNGH, UNGH, ungh, ungh, ungh.

John sent a radio message to the other vehicles.  They will detour to join us on their way back to Stanley’s.

As we watched the four males, light faded from the sky and disappeared.  Blue became purple, then black.  Stars appeared, each one of them a cold clear diamond.

John switched on a spotlight.   A male sat in front of us, looking to our right, listening.

Spotlight off.  The couple behind me murmured to each other and tried to become small blobs, rather than humans with discernable arms and legs and heads.

Spotlight on.  Another male, on the left, folded into the grass, on his side, with a barely audible ufff.

A distant contact roar from one of the lions on the other side of the reserve.

Spotlight on.  The male in front of us headed to a wall of brush and trees, disappeared.

Spotlight off.  Shallow breaths through my open mouth.  A commotion to our left.

Spotlight on.  Another male, who was sitting off to our right, had moved across the road and was now rubbing the side of his face against the lion inert in the grass.  When he couldn’t get his companion to rise, he also slid into the bush.  A fourth lion, just up the road, ghostly in the spotlight’s shadow, followed the first two, disappeared.

Then a faint roar, in the distance again.

The hair on my arm rose before I even thought about it, as I realized that next to me the grass hissed, hisss zissh, hisss zissh, as something large walked by.

“He’s right beside me,” I whisper without moving my lips.

The inert lion was gone.  John twisted his hand over his shoulder and the light caught the back of a lion just passing the front tire on my side of the vehicle.  His great head swung back and forth as he walked hisss zissh, hisss zissh through the tall grass.  The lion had walked around the back end of the vehicle without us hearing him until he was right next to me.  The skin on the back of my neck tried to crawl up to the top of my head.

The lion turned his head toward the light.  The pupils in his yellow eyes shrank to pinpoints.

He was that close.  I saw his pupils shrink to pinpoints.

He huffed and swung around to follow his three brothers into the bush.  I exhaled.  Had I been holding my breath that long?

The two other vehicles appeared just in time to catch a glimpse of his back in waist-high grass.  They followed him, bouncing through the brush, their headlights tapping the tops of trees.

John turned in his seat and looked at us.  The spotlight in his lap illuminated his face and glinted from the eyes of the young couple, eyes that were now nearly the size of  their open mouths.

“I think it is enough,” he said.  “Let’s go to the hyena’s den before the others get there.”