An excerpt from my book:

After a long morning walking with tourists we stumble into a shady grove near a lagoon and into the illusion of an al fresco dining room in an elegant restaurant. Fresh branches of mopane decorate the surface of a table covered with a white linen cloth.  The leaves on each mopane branch fold modestly like small olive origami decorations.  Knives rest across white linen napkins on white china bread plates.  The staff from Stanley’s have set up a buffet complete with chafing dishes.  White lace doilies edged with heavy colored beads protect the salads from flies.  Pepper grinders, oil & vinegar decanters water glasses and wineglasses complete the setting.  Nodding at murmured compliments, the bartender hands out cold beer, which has been uppermost on many minds.

It’s odd how fast we re-civilize.  All morning long the tourists had been mostly silent, filled with awe at walking next to elephants.  Now they sprawl in camp chairs and compare camera lenses.

A cake of soap sits in the fork of a bush next to a white basin on a folding wooden stand.  I use the murky water in the basin to lather my hands.  One of the camp staff holds a pitcher of clean water for rinsing.  The water in the basin turns even grayer with dirt.  I empty the basin and small puffs of dust rise from the force of the water hitting floury sand.

Then I too re-civilize, join the human conversation.

While Sandi minds the elephants, Doug mounds his plate with food.  He has that unique gift of talking and eating at the same time, consuming enormous amounts of food and speaking in short bursts.  Each time he answers a question he sets his fork down and regretfully watches where he places it.

Our heads swivel and our eyes follow a finger pointing skyward.

Locked together, talon-to-talon, fish eagles plummet toward earth in their mating dance, twirling in passionate grip with each other, taut bodies wheeling faster and faster towards earth, picking up suicidal speed.

The eagles break off a second before hitting the ground and swoop up to roost in trees opposite each other.  They scream back and forth, flinging their heads over their shoulders.  The female’s voice is lower, counter-point to the male’s shriek.

One of the camp staff shakes his head.  “I have never seen that before.” 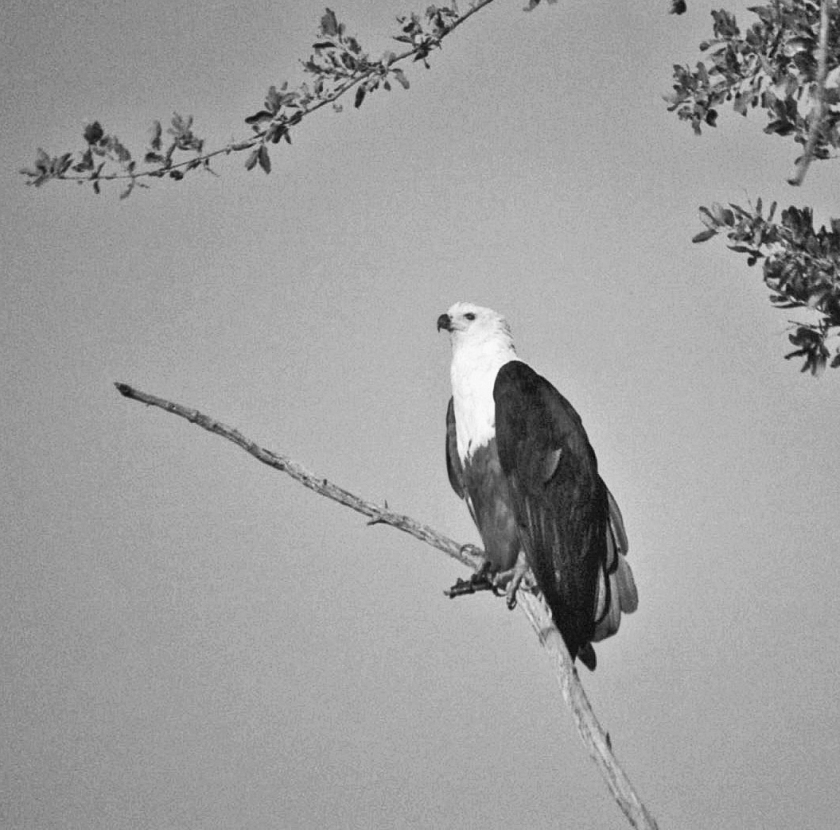 They have the same habits: they mate for life and build huge stick nests in trees, nests twelve feet wide and ten feet deep.  They dwell in the same habitats: rivers, lakes, creeks, lagoons, estuaries, and man-made reservoirs.  Both carry fresh fish caught near the surface in their grasping talons, carry the fish headfirst for lesser wind resistance, one claw behind the other, surfing, riding a fish through the air.

The eagles are a reminder that in only five more days I will be going home.  Home, where I once witnessed bald eagles teaching their young how to snatch crows out of the air.  Where bald eagles row fish ashore, using their wings as oars when the fish are too large to hoist aloft.

Where I live and where I am.  That dual place inside me, moment and memory, locked together, spiraling, spiraling, just like these fish eagles, feather tip to feather tip, talon to talon.  Mind spinning, I want to hold onto a tree with fierce feet, cry out, return to the ground, stay here.  Learn from birds, from clouds, from rain.