An excerpt from the book I’m writing about elephants:

Jabu, Morula and Thembi slowly browse through the brush on one of the islands stranded after last year’s Okavango flood.  Opposite of us, across a dried lagoon filled with grass, is a rare tree species for this part of the Delta: an African baobab, Adansonia digitata – digitata for the five leaves it has per stem.  The baobab is deciduous, naked this time of year.  Its prehistoric appearance conjures up primeval landscapes full of odd plants and crawling creatures that existed in the ages before the dinosaurs.

There are eight species of baobabs, six found in the dry deciduous forests of Madagascar, one in Australia, and digitata, which grows in West, East and Southern Africa.  Baobabs are also found on the Arabian Peninsula, spread there by the movement of human settlements.

Adansonias are named after the French naturalist, Michel Adanson (1727-1806), who spent five years in Senegal, brought home a huge plant collection, and published a paper on digitata after his return.  Adanson also wrote a masterwork of natural history, an encyclopedic l’Ordre Universel de la Nature, but it was based on his own system of classification, distinct from that of his contemporary, Linnaeus (1707-1788).  Linnaeus’s Systema Naturae, introduced binomial nomenclature – using an organism’s Genus, Adansonia, followed by a descriptive modifier such as digitata.  Systema Naturae classified 4,400 species of animals and 7,700 species of plants.

In contrast to Linnaeus’s system based on structures, Adanson proposed a “natural” system that took many features of the plant into account, which included structure along with function, growth, evolution and distribution.  His system was ignored in his time because he refused to use binomial nomenclature.  However, the publication in 1789 of Genera Plantarum, by Antoine Laurent de Jussieu, combined Adanson’s use of multiple structures with Linnaeus’s binomial classifications – a methodology widely accepted and still in use.

Adanson’s masterwork was huge, just like the baobab: 27 large volumes with a 150-volume index that contained an alphabetical treatment of 40,000 species, a vocabulary listing 200,000 words, 40,000 drawings and 30,000 specimens.  It was never published.  It is, however, preserved in the Hunt Institute for Botanical Documentation, at Carnegie Mellon University in Pittsburgh, Pennsylvania.

Elephants love the bark of the baobab because of its moisture content.  As insurance against harsh drought, the swollen trunk of a single baobab stores up to 32,000 gallons of water, making its wood soft, spongy and fibrous.  A plank cut from this tree will decrease in volume by 40% and shrink in length by 15% while it dries.  Sometimes, during these times of drought, elephants will completely gird a tree, leaving it standing as if standing on its own pedestal, and yet the baobab will still survive.

The bark on the baobab across the lagoon is smooth and pinkish gray – untouched by elephants, probably due to its proximity to the Okavango’s permanent water channels.  I estimate this tree to be about 22 feet in diameter and 70 feet tall.  Mature baobabs have trunk diameters of twenty-three to thirty-six feet and reach heights of sixteen to ninety-eight feet.  The Glencoe baobab, near Hoedspruit in the Limpopo Province of South Africa, is considered the largest specimen alive.  Up to recent times it had a circumference of 154 feet.  In 2009 it split into two still-living parts, revealing an enormous hollow in the middle.  The date 1893 is carved into its trunk.

Found mostly in seasonally arid areas, baobabs grow very slowly as they age.  However, in its first years of life, a baobab grows relatively quickly.  A tree planted in Kruger National Park in South Africa grew 65 feet tall with an eleven-foot diameter in just 38 years.  In contrast, an older tree described by Livingstone in 1858 grew only two feet in circumference in 110 years.  Despite their early exuberance, baobabs can be cultivated as bonsai trees. 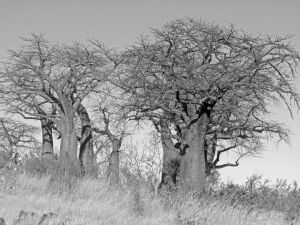 Although the Glencoe baobab is thought to be two thousand years old, baobab wood does not produce annual growth rings and it actually shrinks during times of drought, so its size is not an indicator of its age.  The baobab across the grass lagoon is probably – my best guess – around 600 years old, or older, taking root about the time Eric the Red colonized Greenland (985), or later – perhaps the year Gutenberg invented the printing press (1439).  This tree, this timepiece, first dropped its leaves during the Middle Ages, and will continue dropping them, annually, for several thousand years more.

Just twenty days after leaving England, the Beagle anchored at the Cape Verde Islands on Jan 16th, 1832.  As Charles Darwin surveyed the islands with ship’s captain Robert Fitzroy, they measured a baobab that was 45 feet tall and thirteen feet in diameter, and rumored to be a thousand years old.  Darwin remarked in his diary that Adanson supposed some “celebrated baobabs” to be 6,000 years old.  The enormous tree “with its great thickness” impressed Darwin, and he wrote in his diary, “This one bears on its bark the signs of its notoriety – it is as completely covered with initials & dates as any one (tree) in Kensington Gardens.”

The Glencoe baobab has never been subjected to radiocarbon dating, but another in the Limpopo area has been carbon-dated at over 6,000 years, older than the pyramids at Giza (2560 BC).  Several other trees in the region have also been dated  – at about two-to-three thousand years old.

As I look at the baobab across the grass lagoon, I wish I could slip sideways into the life of this nearly eternal tree, and time-lapsed, witness the swirl of life around it as it fattened and grew.  And why not wish also for the future, for another one or two thousand years more?

I turn at the sound of a branch breaking behind me, squint against the sun, and cup a hand at my forehead to shade my eyes. The elephants are great gray silhouettes, haloed all around in bright, bright light.  My watch ticks on my wrist, its hands pointing to meaningless numbers.

2 thoughts on “The Tree of Life, Part One”

Elephants, wherever you encounter them, are wild animals. Close, unsupervised contact with any elephant should never be initiated. Do not climb into enclosures; do not get out of vehicles. Do not tailgate an elephant. Think of how you might behave if a stranger suddenly appeared in your living room. Or materialized out of a solid object. Think of how you would react to a dog nattering at your heels. Respect these great gray beings and they will respect you.
%d bloggers like this: