An excerpt from my book, Larger than Life, Living in the Shadows of Elephants:

In 1998, the Disney Corporation opened the Animal Kingdom Park in Florida. It is, in essence, a 500-acre zoo, containing 1,700 animals representing 250 species, from Abdim’s storks to African zebras.  In the center of the park is a 145-foot-tall, 50-foot-wide sculpture of a baobab, representing the Tree of Life from the Disney film, The Lion King.  Much larger than any known baobab, the sculpture is molded around a refitted oil platform.  Its trunk is carved with 325 animals and contains a theater with 430 seats.  Upon its branches are 103,000 leaves dyed five shades of green, made of kynar, a flexible fluoropolymer resin.

Since opening, the park has averaged 9 million visitors annually, ranking seventh in the world in theme park attractions.  Disney’s resident herd of African elephants has produced six calves, three females and three males, all still living – the most successful breeding program in the United States.  The herd now consists of twelve elephants: four males and 8 females.

Here, in the Okavango Delta, our small herd of three elephants, one male and two females, browse through thick brush on one of the islands left stranded after last year’s flood.  As I might linger over a sunset, Jabu, the male, lingers over a small mopane tree, whose leaves have high protein content, an important year-round food source.  Thembi pulls out a single leaf from a young palm and chews on the sweet cane-like stalk.  Morula has entirely disappeared into a thicket, but I can hear an occasional crack from a breaking branch as she tugs it from a tree.

The white eye of the sun glares down upon us, blinding, melting the wax that held together a small, feathered breeze.  My bones soften, melting.  I lose my ability to soar.

The sun reflects from my camera’s metal buckle and penetrates my brain like a dull pickax.  It’s a burst bomb, pure and searing, a light behind my eyelids, a glimpse of the beginning of our solar system.  Halfway through its own lifespan, the sun is fueled by enough hydrogen to last five billion years more.

I move into the shadow of a nearby mopane.  Thick, dappled shade makes diamond patterns at my feet.  Slowly we begin to leave the island, the elephants more reluctantly than the humans.

Across a dried up lagoon full of grass, is a baobab, a rare species for this part of the Delta.  Its nude limbs, entangled as a root system, seem to search for moisture from the sky.  Kalahari Bushmen believe the trees appear fully-grown, planted upside down by the gods, with the tree’s roots in the air.  They also believe spirits inhabit the baobab’s large, waxy-white flowers, and if anyone has the audacity to pick one, they will be eaten by a lion.

This baobab is deciduous and luckily naked this time of year.  It’s around twenty-two feet in diameter and about seventy feet tall; a young tree that I would guess is 600 years old.  Its trunk is smooth and relatively unblemished.

Older baobabs have a tendency to rot out their heartwood, but completely heal around the hollowed trunk.  Rats and reptiles frequently invade them.  The African honeybee often establishes hives in crevices of a hollowed trunk.  Native to central and southern Africa the bees are actually a subspecies of the Western honeybee.

A single sting from an African bee is no more venomous than a single European or American bee sting, though African honeybees respond more quickly when disturbed and send out three to four times as many workers in response to a threat.  They also pursue an intruder for a greater distance from the hive – thus their reputation as “killer” bees.”

So the Honeyguide bird is more than willing to let another species take that risk.  Physically unable to break open a bee’s nest, it has developed a symbiotic relationship with humans, indicating the presence of a hive by continuously dive-bombing nearby, all the while uttering monotonous, squirrel-like chirps.  Alerted by the Honeyguide, intrepid Kalahari Bushmen pound pegs into the soft bark of baobabs to climb the tree, lull the bees with smoke and obtain a sweet reward for taking that risk.  Bushmen always leave honey for the birds, for if they should fail to do so, the Honeyguide will one day lead them to a lion, instead of a hive.

Smooth and pinkish-gray, the baobab across the grass lagoon has only a few hollows in its trunk excavated for bird nests, and a single scrape from an elephant’s tusk.   Older trees are often deeply scarred as high as an elephant can reach.

Hollow baobabs have a long history of creative uses by humans.  During World War II, a baobab in Namibia was fitted with a toilet.  The toilet is still there, but the tree has grown around the door, which no longer opens.  On the lower Zambezi River, the Kayila Lodge has an operational toilet tree, used more for photo opportunities than necessity.  And on a private farm in Sunland, South Africa, an enormous baobab contains a wine cellar and bar, complete with draft beer, a dartboard, stools, and a wooden bench along the wall.  The tree is possibly the oldest baobab in existence – it has been radiocarbon-dated to the end of the Stone Age, around six thousand years ago.

In Kasane, Botswana, a baobab was used as women’s prison in the early twentieth century.  I imagine it also served as a deterrent – incarceration with potential rat and reptile cellmates would make any criminal think twice.  Although that baobab died in 1967, an offshoot now grows next to the remains of the jail.  Throughout Africa, hollow baobabs have served various purposes – as hiding places during tribal warfare, as shops, storage shelters, barns, chapels, burial sites, post offices, even a bus stop.

Almost every part of the baobab is edible.  Fresh leaves are eaten as spinach and condiments.  The shoots from germinating seeds taste like asparagus.  Bulbs from its roots make porridge.  Fluid extracted from the bark of the baobab is used to dilute milk. The ash from a burnt tree is a good substitute for salt.  Pulp and seeds of its fruit contain potassium acid tartrate as well as citric acid, an effective substitute for cream of tartar, and resulting in the Afrikaans name “Kremetartboom.”  Early settlers also used fruit pulp in place of yeast and added baobab leaves to speed up the fermentation process in winemaking.  The fruit pulp has the highest known concentration of Vitamin C.  It makes a slightly acidic, but refreshing drink when mixed with water.  Baobab seeds have the same protein value as domestic nuts and can also be roasted and ground into a substitute for coffee.

The baobab is often called “the Monkey-bread tree,” because baboons and monkeys eagerly consume its fruits.  Nearly all four-legged browsers eat the baobab’s fallen leaves and flowers.  The flowers open just before dark, produce copious amounts of nectar and last for only 24 hours.  Their heavy, carrion-like scent attracts nocturnal insects and bats, such as Peter’s Epaulleted Fruit Bat.

In times of drought, elephants strip the bark of the baobab and eat the spongy wood underneath, estimated to contain 40-70% water – classifying the baobab as the world’s largest succulent.  An individual baobab can store up to 32,000 gallons of water and weigh 266,880 pounds – or one hundred and twenty-one tons.   A big bull like Jabu can weigh up to 16,000 pounds or seven tons.  If you stacked elephants one upon the other, it would take seventeen or eighteen elephants to equal the weight (if not the mass) of the water stored in a large baobab.

The name baobab derives from North African Arabic, bu-hibab, “fruit of many seeds.”  Within life spans that reach six thousand years, the baobab nourishes countless species, takes in tons of carbon dioxide and releases equal amounts of oxygen.  It cycles and recycles, measures seasons by dropping its leaves, measures centuries by the blur of life beneath its limbs.  A baobab’s death is the death of an eternity, as measured by one of those species for which it provides. 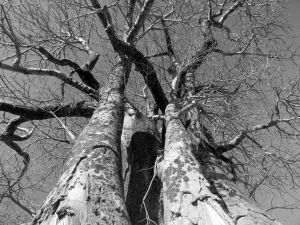 4 thoughts on “The Tree of Life, Part Two”